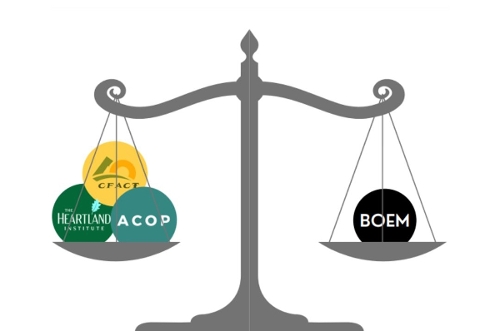 The American Coalition for Ocean Protection (ACOP) has partnered with the Committee for a Constructive Tomorrow and the Heartland Institute to retain legal representation in preparing public comments regarding the Coastal Virginia Offshore Wind Project.

The project has been proposed by Virginia public utility Dominion Energy and requires approval from the U.S. Bureau of Ocean Energy Management (BOEM). BOEM is expected to publish a "Draft Environmental Impact Statement (DEIS)" by year-end.

ACOP consists of beach communities and public policy think tanks from North Carolina to Maine and out to the Great Lakes. Over twenty wind projects have been proposed in lease areas off the east coast and the Great Lakes. BOEM has been approving projects at an accelerating pace. The approvals have been questionable.

Alternatively, what we see on offshore wind projects is BOEM ignoring major violations of core environmental protections. For example:

BOEM has been ignoring public comments on these important issues leaving legal action as the only recourse. However, participation in such public comments is required to have standing to bring a lawsuit.

The American Coalition for Ocean Protection (ACOP) is a project of the Caesar Rodney Institute (CRI). CRI is a 501(c)(3) non-profit, nonpartisan, public policy research organization in Delaware.