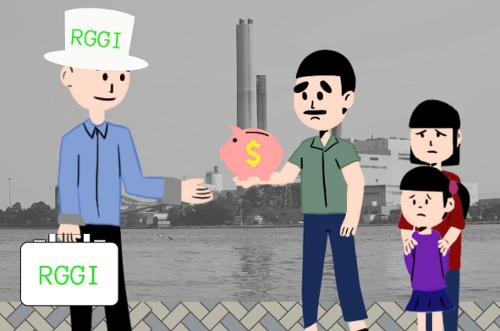 The Secret Behind a Power Plant You're Paying For...

October 7, 2022
Have you asked yourself why the Indian River Power Plant in Millsboro, DE, is closing two decades early and why your electric bill is going up about $75 a year to pay for it? It's closing because a hidden tax imposed by Delaware's government made the plant uncompetitive in bidding power into the regional power grid. So, the plant is losing money, and the owner wants to shut it down.
The power plant plays a major role in maintaining the local power grid reliability. Expensive transmission upgrades must be made to compensate for its closing, leading to higher electric rates. The rest of our in-state power plants face the same fate, and your electric bill will keep rising while service reliability falls.

The higher allowance fees, equivalent to a tax, hit the coal-fired Millsboro plant first, as coal has about twice the emission rate as natural gas. About 90% of in-state electric generation is produced by natural gas-powered plants, which are already seeing falling rates of generation from the tax impact. The tax rate is expected to rise another 70% by 2030. We can expect the remaining power plants to attempt to close, leading to another round of electric price increases for transmission upgrades and backup power solutions.

The intent of the RGGI tax was to lower emissions. Delaware emissions have fallen as we generate less in-state power. However, electric demand has stayed about the same, and we now meet that demand with generation in other states fired by coal and natural gas. By importing power, we are simply exporting emissions elsewhere. That actually increases emissions when transmission line losses are considered.

Other state legislation encourages the construction of wind and solar power and energy efficiency through mandates and subsidies. After 14 years, only 2% of in-state electric generation is from solar and wind, with small improvements in energy efficiency.

Delmarva Power electric bills have line items that show these poor results increased residential electric bills by about $120/year. Delmarva buys power produced by others and can't track the RGGI tax costs. In Virginia, Dominion Energy owns its power plants; the RGGI cost is known to be about $80 a year.

All together, Delaware's efforts to lower carbon dioxide emissions have failed but are costing residential electric customers about $275 a year and businesses thousands of dollars.

The cost increases will accelerate as more power plants close. Current state consideration of subsidizing large offshore wind projects could alone add over $400 a year. The US Energy Information Agency, before recent high inflation rates hit, estimated a 26% of US households were struggling to pay electric bills requiring monthly decisions to pay the electric bill or buy food and healthcare. All this pain and the emission reduction programs are not even working.