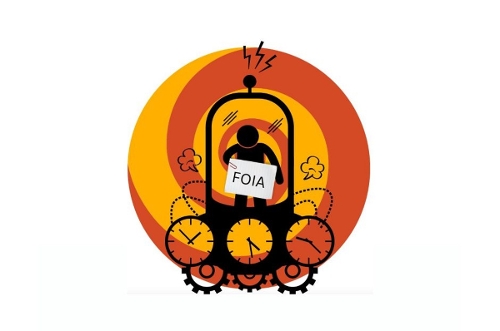 Why is Delaware's FOIA Process still stuck in the '70s?
With a $60 million state technology budget, isn't it time that all public information be available online to access directly rather than by written request?
By Charlie Copeland, Director
Center for Analysis of Delaware's Economy & Government Spending
September 16, 2022

In 1977, the Delaware General Assembly adopted Delaware's Freedom of Information Act (FOIA), stating in the Delaware Code that:

"[I]t is vital in a democratic society that public business be performed in an open and public manner so that our citizens shall have the opportunity to observe the performance of public officials and to monitor the decisions that are made by such officials in formulating and executing public policy; and further, it is vital that citizens have easy access to public records in order that the society remain free and democratic." (Source: 29 Del. C. § 10001)

I was in high school in 1977 and remembered calling my friends on our landline phone and running the long cord into the closet so I could have some privacy (all phones were landlines back then!). Forty-five years later, the technological world and the state government have changed immensely. Yet, the FOIA process has remained largely unchanged since the 1970s.

In other words, today, thirty years into the internet era, a FOIA request STILL must be made in writing to the appropriate public body - just like in 1977, with the caveat that the form can now be found online. The following is from the AG's website:

"A FOIA request must be made in writing to the appropriate public body. The State of Delaware has a FOIA request form that may be electronically submitted through an online portal to various state entities."

Of course, the written submission is just the start of the process.

After submitting a written request, the FOIA government agency can simply delay responding by stating that the request is "voluminous" - a term NOT defined in the Delaware Code. The agency also can claim that the request was not in "sufficient detail," further delaying or canceling the request. In addition, the agency can ask for significant monetary compensation for "copying charges," thereby limiting access to public information, especially in historically disenfranchised communities.

In short, there is limited remedy for citizens to gain access to public information from an expansive government bureaucracy. It is so bad that an effort was made in the recent Delaware General Assembly with the introduction of Senate Bill 155 to codify the rights of Delaware citizens to sue the Government in the Delaware Superior Court.

However, with court and attorney fees regularly running in excess of $30,000, this solution seems completely impractical for a Delaware parent who simply wants to know their child's middle school curriculum.

Solutions Right in Front of Us

Fortunately, in 2022 there are technological solutions right in front of us, but that would require changing Delaware's government focus from a reactive FOIA program to a forward-looking FOIA program.

Every document created today is created digitally (on the computer), and even documents received by the State as hardcopy can be scanned into a digital format to be on the computer.

The state of Delaware simply needs to post (make available) all public information on its website so that search engine crawlers can index the pages for web searches.

To do this, the State needs:

With the pieces in place, Delaware's government should change its paradigm from defensively reacting to requests for public information to progressively ensuring that the words written in 1977 -- "citizens shall have the opportunity to observe the performance of public officials and to monitor the[ir] decisions..." - are meaningful.

The "FOIA Coordinator" role should be changed to focus on loading ALL public information onto the State's website for indexing by search engine crawlers so that the documents are searchable by any citizen at any time, thereby greatly reducing the need for written FOIA requests while creating an open government for every Delawarean.

(Note: There would remain some issues, like internal email exchanges, but by eliminating the broad requests for information, targeted requests become much easier to handle on a case-by-case basis. The AG notes that email requests can be handled by each public body "using reasonable efforts by its own staff.")

In the Delaware Attorney General's training of "FOIA Coordinators," she lays out the purposes of FOIA:

However, a process created in 1977, when government was smaller, and technology did not exist, no longer achieves these purposes. Despite numerous attempts at tweaking the system, as recently as 2021, FOIA laws are NOT achieving their objectives.

With trust in the government at all-time lows, the Carney Administration and the Delaware state legislature should make it a priority that ALL public information be available and searchable online by default to all Delawareans.

As former U.S. President Barack Obama said in his 2009 address to the nation, Delaware should follow:

"My Administration is committed to creating an unprecedented level of openness in Government. We will work together to ensure the public trust and establish a system of transparency, public participation, and collaboration. Openness will strengthen our democracy and promote efficiency and effectiveness in Government."